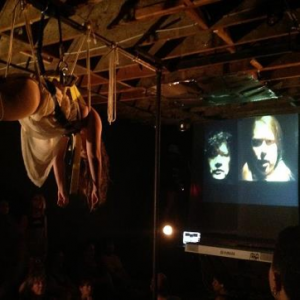 Together, artists Ulysses Castellanos, Cathy Gordon and Terrance Houle reimagine and recreate the 1970 Hollywood film Little Big Man as a new media performance. No simple narrative, the work is a dizzying visual and auditory spectacle that incorporates elements of performance art, dance, video projections, sound art, noise and punk rock, creating a series of difficult images that are both aggressive and poignant. The work examines the complexities of cultural, sexual, religious, and gender identities as they are formed and performed, the legacy of colonial violence and its representation in Hollywood cinema. The crux of the performance focuses on the dual nature of the traitor/ally as personified by the historical chief Little Big Man and the fictitious Dustin Hoffman character of the same name.

Little Big Man Remix was developed in residency at The Association for Native Development in the Performing and Visual Arts (ANDPVA) at the invitation of ANDPVA Executive Director Wanda Nanibush, and made its debut in Toronto as part of ANDPVA’s House of Wayward Sprits festival of indigenous performance.